We all know the popular saying “Health is Wealth”. By health we do not mean the absence of physical troubles only. But it is a state of complete physical;, mental and social well-being. The loss of health is loss of all happiness. India has made rapid strides in the health sector since independence. However, various eye opening data from NFHS clearly indicate that access to healthcare still remains a challenge. While the health statistics of rural India continue to be poor, the health status and access to health for the poor in urban slum dwellers has surfaced to be equally deplorable and have less than 4% of government primary healthcare facilities.

Urban slum residents suffers from various health conditions owing to mainly two reasons –first the lack of education and thus lack of awareness; and second the unwillingness to lose a day’s wage in order to reach the nearest medical facility. Healthcare for underprivileged, which is a desperate need, thus remains unaddressed.

In such a scenario a free regular medical clinic has been opened in slum areas of our national capital. at our free medical clinic Doctors and paramedical staff from renowned government and non-government medical hospitals examined patients, gave free medical consultation in areas of general medicine, dental treatment, Blood Sugar and Blood Pressure Testing, public hygiene and prescribed, distributed free medicines, conducted free medical tests for the poor and needy.

PEOPLE ARE ADDRESSED DURING OUR DENTAL CAMPS

Mansi a resident of chuna bhatti slum area, located at our national capital New Delhi .being a bright student and good in academics she receive regular applauds from her teachers. but things started to change when she started to fall ill frequently, due to this she remains absent quite often from her school. at first not thinking it to be serious. mansi's parents started with the traditional home remedies but soon they realize that these were not enough, they decided to visit to a doctor but owing to the distance and expense, no follow up visits were made. mansi's condition was getting worsen day by day as she developed hig

Ram pal is a daily wage worker, he suffered from multiple health issues like high blood pressure, high sugar, breathlessness and chest pain. Tough financial conditions always kept Ram pal in the state of anxiety. As he is a mere rickshaw puller so he didn’t visit any doctor for consultation, as he didn’t want to miss his daily wage by taking a day off.

His wife assisted him to one of our health camps. After several test Ram pal was diagnosed with high diabetes, hypertension and asthma. He was prescribed with two weeks medication which showed some relief. He is advised to continue anti diabetic,

He is a 7 year old boy ,his father is a daily laborer , he was diagnosed with blood cancer due to poor socio-economic status it is not possible for his father to afford the expenditure of his son master Shivam’s medical treatment ,his father get to know about us from one of his family member residing in Delhi , who visited our health camps before .we at CARE INDIA WELFARE TRUST deeply moved by the situation it assured the family to provide all the financial support for Master Shivam’s treatment . After a yearlong fight with cancer, slowly he is recovering now and see how beautiful he smiles.

Sign up for our email updates to receive CARE INDIA WELFARE TRUST newsletter, stories and information on opportunities to make a difference 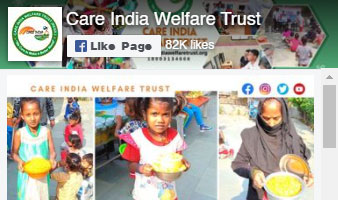